The recent Marty-replay I did with a story about Marcie stirred some old memories. It brought another story to mind.  Part (1) is here and part (2) can be found here and part (3) is right here

But the week came to an end, and Friday night was our last night at the ski resort. Marcie was to drive home with me, and that was a very special trip, which is coming up …

Marcie and I wildly frolicked that night like there was no tomorrow. Except that tomorrow was a lot of fun, too. We had breakfast, and then checked out of the hotel about 11am, ready for the long drive ahead. 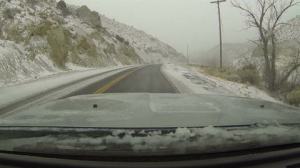 Marcie was extremely tired (remember she didn’t get those late afternoon naps like I did) so in less than an hour she was dozing off beside me. The drive was pleasant, and since the weather was clear I was quite happy driving. The snow sparkled brightly off the evergreens along the 2-lane highway we had to take before reaching the freeway that would take us home. I even spotted some deer foraging in the distance.

After about an hour or so, Marcie roused from her drowsiness and sat up. For the next hour we chatted about what a fun week we had had and how it had been such a good idea.  Just then a sign for an upcoming rest stop appeared, and I had a thought.

“Sure,” Marcie said with a twinkle in her eye. I had a hunch she was reading my mind.

I pulled off the exit ramp and into the rest center, but parked the car way off to the back of the parking area, far away from any other cars and trucks. At this time of year, it was certainly not crowded. Given the cold temperature, I left the engine running. I undid our safety belts and then begin to kiss her softly.

Marcie’s hand moved for my crotch. After a quick feel of my bulge, she deftly unbuckled my belt, released the button, then unzipped the fly.  I eased down my jeans and boxers about a foot to give her easy access to what she wanted. She sucked me slowly, but took in the full length right from the beginning. I let out a huge sigh. Marcie kept the pace easy but went about her task methodically. She looked at me with the glint in her eye of a true vixen. Given all the heavy breathing, it was but a minute before the windows of my car were misted over, hiding the naughtiness going on inside, in case anyone happened to wander by.

Marcie continued her worship of my manness. Occasionally she reached over to tenderly squeeze my balls. I was quickly losing control … my hips suddenly rose and I cried out as I released strongly into Marcie’s mouth.  She released me for a second, smiled up at me, then began to lick me clean. Talk about having someone in the palm of your hand (and mouth).

I softened quickly and Marcie chuckled.

“My work is done here.” she laughed.”I’ll go get us those coffees and sandwiches while you recuperate.”

Finished our caffeine and sandwiches we headed out again, westward home. It wasn’t that long until the sun began to lower in the sky. In winter in northern climes it does that, you know.  Soon enough twilight arrived and then the dusk surrounded us. It was about 45 minutes since I had come in Marcie’s mouth and my need to play with her was returning.

Marcie turned her head to look at me for a second.

I glanced back and forth from the road to the strip show that was happening beside me. I chuckled as I saw her wriggle out of her pants and panties.

“Nice! Good girl,” I said as I admired her landing strip. “Now begin playing with yourself.”

And she did. For the next while her fingers were busy. Every so often I would reach across and use my fingers, too, as best I could, then lick my dripping digits, all while keeping us out of the ditch at high speed in the early evening. Marcie had several orgasms on that highway and it was an enjoyable thing to behold, I can tell you.

As the evening wore on, I kept Marcie in her nakedness. It was just fun to have. Then wouldn’t you know it as we neared the 2/3 point of our journey, up popped a sign for an upcoming rest center.

We looked at each other and called out in laughing unison “Coffee time!”

Well, dear reader, I don’t think I have to spell out what happened next in the darkness of that car. Marty’s essential body parts jumped to life again.

But I let Marcie put her jeans back on to go get the coffees while I gassed up the car. I’m a true gentleman after all.

And so ended my skiing trip with Marcie. A week not to be forgotten. I may never ski like that again.

I was going to call this post “The Naked Ride Home” because I like the title of the song so much, but the nakedness was only partial and only for part of the ride home. But I think you get my drift …